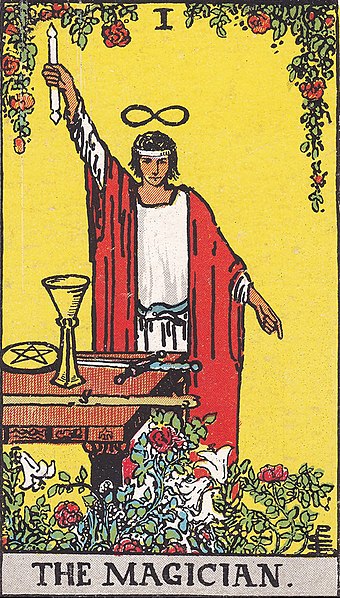 The Magician (I), also known as The Magus or The Juggler, is the first trump or Major Arcana card in most traditional Tarot decks. It is used in game playing as well as in divination. In divination it is considered by some to succeed The Fool card, often numbered 0 (zero).

In French Le Bateleur, “the mountebank” or the “sleight of hand artist”, is a practitioner of stage magic. The Italian tradition calls him Il Bagatto or Il Bagatello. The Mantegna Tarocchi image that would seem to correspond with the Magician is labeled Artixano, the Artisan; he is the second lowest in the series, outranking only the Beggar. Visually the 18th-century woodcuts reflect earlier iconic representations, and can be compared to the free artistic renditions in the 15th-century hand-painted tarots made for the Visconti and Sforza families. In the painted cards attributed to Bonifacio Bembo, the Magician appears to be playing with cups and balls.

In esoteric decks, occultists, starting with Oswald Wirth, turned Le Bateleur from a mountebank into a magus. The curves of the magician’s hat brim in the Marseilles image are similar to the esoteric deck’s mathematical sign of infinity. Similarly, other symbols were added. The essentials are that the magician has set up a temporary table outdoors, to display items that represent the suits of the Minor Arcana: Cups, Coins, Swords (as knives). The fourth, the baton (Clubs) he holds in his hand. The baton later stands for a literal magician’s “wand”.

The illustration of the Tarot card “The Magician” from the Rider-Waite tarot deck was developed by A. E. Waite for the Hermetic Order of the Golden Dawn in 1910. Waite’s magician features the infinity symbol over his head, and an ouroboros belt, both symbolizing eternity. The figure stands among a garden of flowers, to imply the manifestation and cultivation of desires.

According To The Scriptures, These People May Have To Wear A Gold Ring Heavy, Do Not Make This Mistake

Holi Colors Skin Allergy: These Tips Are Very Effective In Protecting The Skin From Colors On Holi