Home > Lifestyle > Meet Kusum Tai, Who Has A Glimpse Of Gandhiji 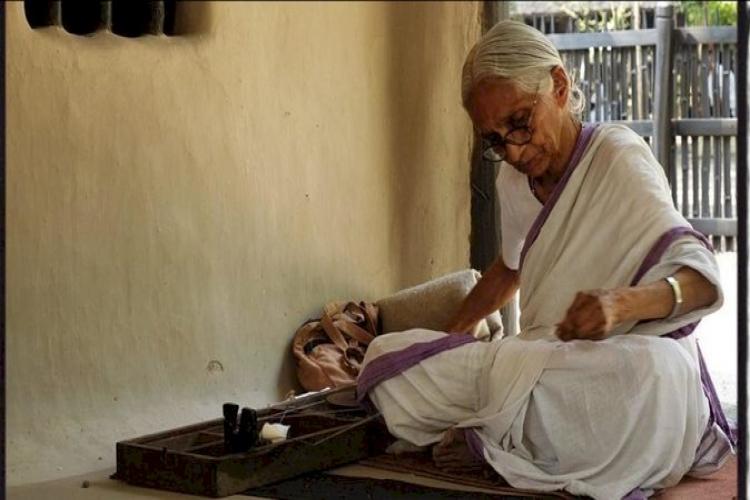 Meet Kusum Tai, Who Has A Glimpse Of Gandhiji

Stylello 3 min read 82
Gandhiji gave a lot to the country. Gandhiji, who gave freedom to the country by following the path of ideal, truth and non-violence, taught that the biggest difficulties can be ended by following the path of truth and non-violence. The country still remembers his sacrifice, loyalty and inspires him to adopt Gandhian thinking. Gandhi ji is not with us but a woman has a big contribution in keeping his thoughts alive even today. Only a glimpse of him can remind of Gandhiji. You will get to see many things related to Gandhiji’s life in Gandhi Ashram located in Wardha, Maharashtra, but here an old lady in Bapu’s hut will not let you feel the lack of Gandhiji. The name of this woman is Kusum, a white colored khadi cotton dhoti, glasses in her eyes, spinning yarn in a spinning wheel. Gandhi Ashram and people who visit there call him Kusum Tai.

Let us know about Kusum Tai, in which Gandhiji’s glimpse is seen. Who is Kusum Tai Kusum Tai is the oldest woman in Gandhi Ashram, who has worked with Bapu from a very young age. Kusum Tai, 88, is an educated woman of Gandhi’s time. He has graduated. Gandhiji wanted the children of the ashram to become self-reliant along with studies. That’s why he started an educational institution named Education for Life. To run this institute, Gurudev Rabindranath Thakur had sent an educationist husband and wife to the ashram. Kusum Tai also received education from this institute. Here children were given employment education. Along with studies, the work of farming, harvesting, weaving etc. was also done there.

Kusum Tai ji has kept the memories of Gandhiji,

Kusum Tai also stayed with Meera Ben apart from Gandhiji. Gandhiji made a girl from Austria his disciple and named her Mira Ben. When this ashram was being built, Meera Ben had come to the ashram before Gandhiji and took over the construction work. She used to live in the village and serve malaria patients before staying in the ashram. Later she came to the ashram.

When Meera Ben was looking after the arrangements for the ashram, Jamuna Lal Bajaj helped her. That entire land belongs to Jamna Lal Bajaj, which he had given for Gandhi Ashram. Kusum Tai came to the ashram as a student and later became a respected teacher here.

Glimpses of Gandhiji is seen in Kusum Tai

Kusum Tai married a teacher of this educational institution and her children also took their early education from here. Later, he became employed in high positions in different fields. Kusum Tai stays in the ashram itself and the memory of every corner there is clearly visible in her words and eyes. The presence of Kusum Tai in the Gandhi Ashram gives the impression of being Gandhiji. The glimpse of Gandhiji is seen in Kusum Tai which makes today’s youth feel that even if they have never seen Bapu, his ideals will never die.

This one mistake of the morning causes acidity