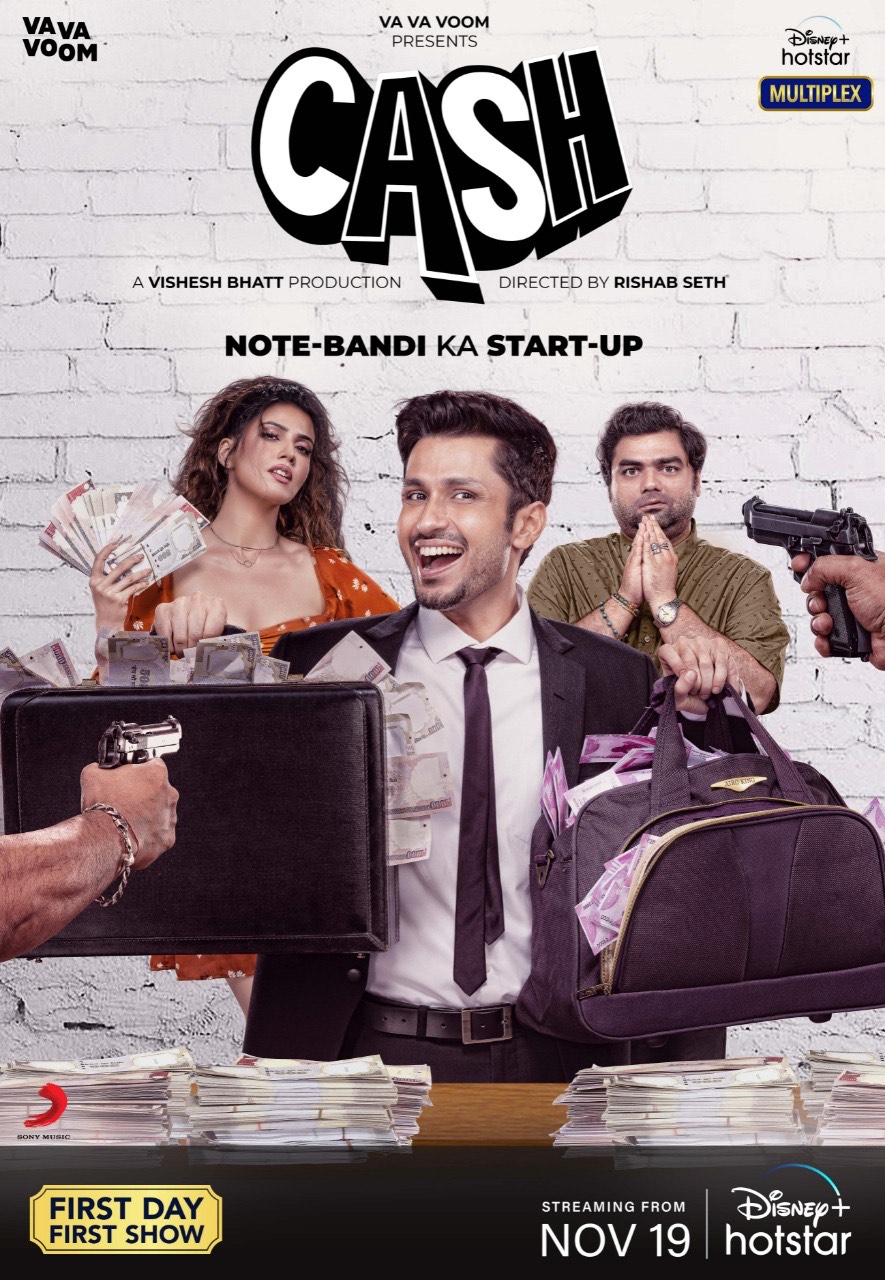 Becoming Elon Musk might have been a dream for Armaan, but will fate be on his side this time around? Disney+ Hotstar is all set to bring the fascinating story of a rookie entrepreneur on the lookout to make it big with his numerous business ideas waiting to take flight, in the upcoming comic caper Cash, starring a talented ensemble cast including Amol Parashar, Smriti Kaira, Kavin Dave, Swanand Kirkire and Gulshan Grover. Building out the entertaining narrative of the film, Rishabh Seth, Aarsh Seth, and Vishesh Bhatt tell the story from the perspective of Armaan, who finds himself caught in a fix to launder five crores, all the while dealing with a coterie of crooked collaborators. The entertaining and comedic ride featuring Armaan and company in Cash, will be exclusively available only on Disney+ Hotstar on 19th November.

After the announcement of demonetisation, when 90 per cent of the Indian currency becomes null and void, Armaan and others like him are presented with an unusual opportunity to help those looking to convert their black money into valid currency. Produced by Vishesh Bhatt and directed by Rishabh Seth, Cash is a fast-paced entertainer packed with comedy, drama and wit, which follows Armaan’s journey into the big bad world of cash and surviving start-ups.

Talking about his upcoming film, producer Vishesh Bhatt said, “Everyone has a demonetisation story – no matter how big or small. Cash is a witty #throwback to the drama that ensued in all of our lives, focused on the 50 day-period after the announcement. I was keen to present this through the perspective of  India’s young entrepreneurs and their never-quit spirit, embodied here by the endearingly hardworking protagonist Armaan. Disney+ Hotstar is the ideal platform to take this roller coaster of a caper and its mad-cap characters to millions of people around the world.”

Adding to the same, director Rishabh Seth said, “Cash is a fun-filled ride for all fans of comedy and suspense. The film has a bevy of quirky characters whose lives turn dramatically in the aftermath of demonetisation with some hilarious results. We also wanted to give the audience a view of all the laundering activities and side gigs that emerged post the announcement. At its core, Cash is a film about entrepreneurship. The film turns the spotlight on people who saw demonetisation as an opportunity to build and grow businesses while most others were flailing about trying to save their black money.”

Actor Amol Parashar, who plays the lead in the film said, “The character I play in Cash, Armaan, he’s a street smart fellow with entrepreneurial skills that need a motive. Armaan’s journey of struggle and hustle is what makes him relatable, and while playing the character, his basic traits and enthusiastic attitude of perceiving a difficult situation stood out to me.”

~Set during the dawn of a new Indian economy, Cash is a comic caper about ambition, family, friendship, love and the real value of money releasing on Disney+Hotstar on 19th November~

Please note: no black bucks were hurt during the making of the film.

The government announces demonetisation. The same day, 25 year old Armaan, a down on his luck, middle class boy, grabs this as a golden opportunity. He takes on the near-impossible task of laundering 5 crores of “dirty” money in less than 52 days before the banks stop accepting old notes. But soon, hot on his heels are politicians, their minions, and a compulsively punctual dabbawala-turned-cop. In this high stakes struggle, will Armaan, his buddy Soda and a crooked real estate agent, Neha, succeed in converting the banned currency?

~Will Armaan make it big or will he have to sacrifice his ear, Cash is coming only on Disney+ Hotstar on 19th November~

Can't we get divine power that is God along with all worldly desires?

Add Glamor To Casual Outfits With Off Shoulder Outfits