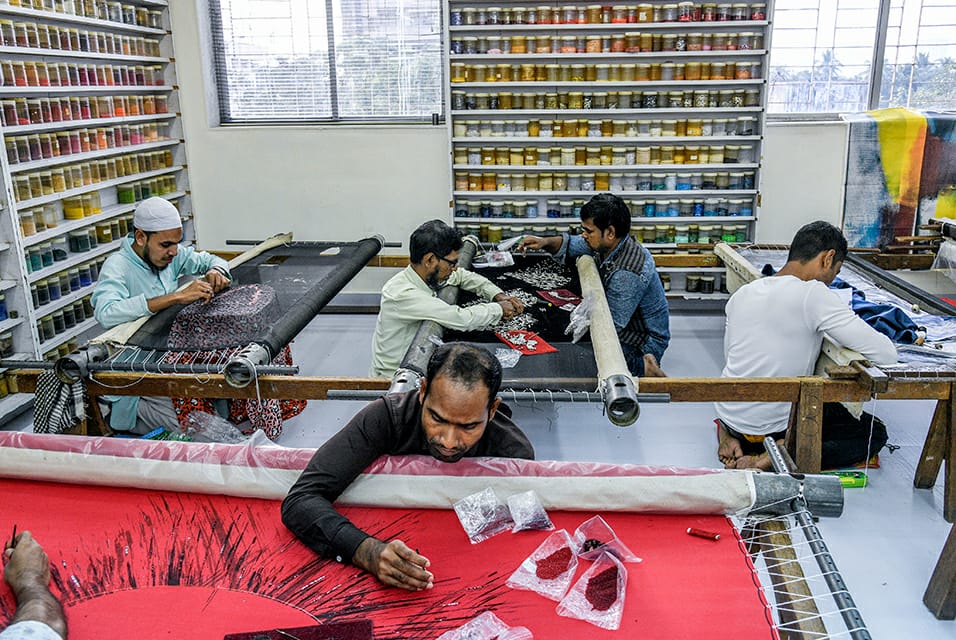 Saddam Sekh used to be a floor supervisor at a steamy Indian workshop in Mumbai that produced orders for an exporter working with some of the biggest names in luxury fashion, including Dior and Gucci. Day and night, he would watch as the karigars — an Urdu term for the highly skilled artisans who specialize in handicrafts like embroidery, beading and appliqué — stitched designer gowns destined for the Hollywood red carpet, or ornate samples for runway shows in Milan and Paris.

But when the coronavirus pandemic took hold, their work slammed to a halt, the backbone of the Indian garment supply chain quickly crumbling as millions of migrant laborers scattered across the country. More than a year later — as India races to contain a second wave of the coronavirus, centered in Mumbai, with further lockdowns — many of those employed by the Indian fashion industry are struggling to adjust to a harsh new reality.

“The factory is currently shut because there is no work; it’s a big zero now,” Sekh said, adding that some of the artisans were working instead as day laborers for 200 to 300 rupees, or $2.50 to $4, per day.

One ended up in a biscuit factory, another in plastics, and another in farming. Some were calling from their villages, pleading for loans, but the managers and supervisors themselves are in dire financial straits. For now, the factory gates remain locked.

“The situation before was nothing like what you see today,” Sekh continued. “The karigars especially are in extreme distress.”

Mumbai, where labor is cheap and the quality of intricate handiwork high, has long been a linchpin in the global luxury supply chain. But in the pandemic, orders vanished overnight. Although some of Mumbai’s workshops have reopened, the volume of requests from high-end fashion brands is far from what it was. Prospects for many karigars remain bleak.

“For months, all production and commerce flatlined across the spectrum of the Indian fashion sector, including at couture-level ateliers,” said Sunil Sethi, chair of the Fashion Design Council of India. “It was a total catastrophe for our industry. The fortunes of manufacturers and exporters took a massive nosedive. Many were forced to shut down or slash their workforces. At the bottom of all that are laborers like the karigars.”

With many Western markets still in lockdown, events such as big weddings, black-tie parties and fashion shows have dropped off the calendars of wealthy clients, many of whom are not in the mood to spend on pricey fashion and accessories.

“Red-carpet dresses and cocktail outfit orders have largely disappeared, which has meant that financial pressure on specialist workshops has continued here,” said Max Modesti, founder of Les Ateliers 2M, a Mumbai embroidery firm that works with Chanel and Hermès.

Those two luxury houses and Louis Vuitton were the only three that increased their Mumbai orders in the past year, Modesti said. Orders from other Western fashion houses were either reduced by around 50% to 70% or canceled, he said. Sethi confirmed those statistics.

Slow Fashion Brands From The Philippines To Invest In This Spring