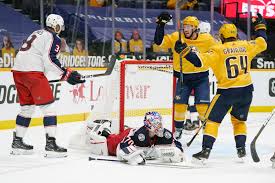 NASHVILLE, Tenn. – It’s starting to feel like watching a replay of the same movie.

Each time the Blue Jackets play a game this season, the plot now feels eerily similar from one game to the next – from the Jackets usually scoring the game’s first goal to their opponent overcoming it with a dominating effort to control the puck.

It happened again in back-to-back losses to the Nashville Predators this weekend at Bridgestone Arena, including a 3-1 loss on Sunday, and there seems to be no end to the Blue Jackets’ struggles in a broken record of a season.

Just like it happened in their 2-1 loss to the Predators on Saturday, the Blue Jackets went up 1-0 before the mid-point of the first period and were unable to build off it.

Kevin Stenlund’s goal just 3:45 after the first puck was dropped put Columbus up first for the 16th time in their first 23 games, but was again a short-lived accomplishment.

3 Style Essentials Everyone Will be Wearing this Summer