Home > Art > Paintings > Up to my eyeballs in art at Superblue 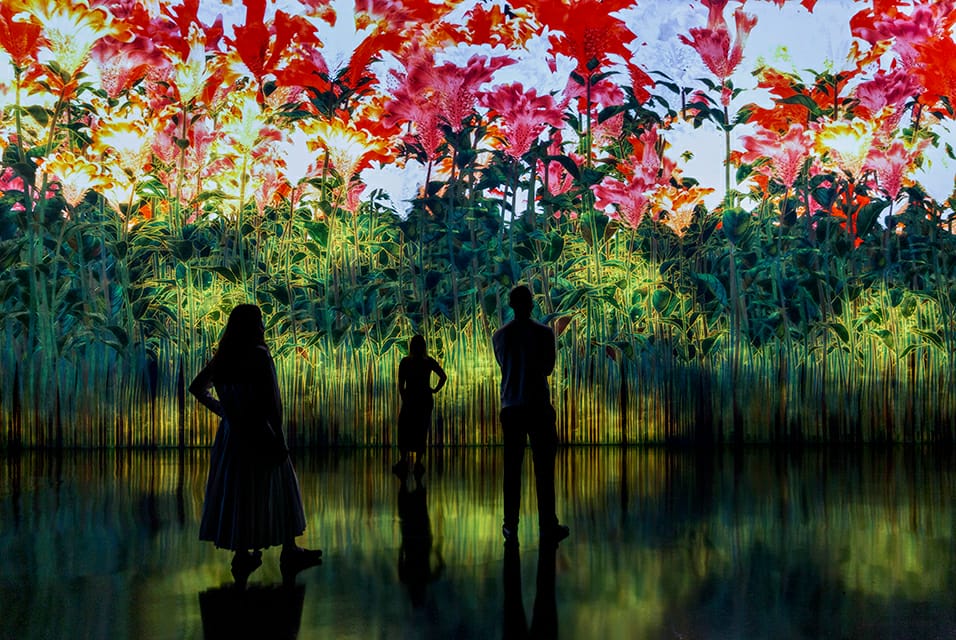 Feeling a little like Alice in Wonderland as gigantic digital images of red, white and cream-colored dahlias budded, bloomed and shattered on the wall in front of me, I dithered over what I was witnessing. Is this a forward step in the march of modernism or a debasement of art into theme park entertainment?

The dazzling floral extravaganza by teamLab, a digital-art collective based in Tokyo, is the dynamic centerpiece of an inaugural exhibition at Superblue Miami, an “experiential art center” (or an EAC to initiates) that begins invitational previews next week before opening to the public April 22. Backed by the juggernaut Pace Gallery and Laurene Powell Jobs’ Emerson Collective, Superblue is the blue-chip contestant in the rapidly growing field of immersive art.

The popularity of this genre is driven by contradictory desires, as demonstrated memorably by the line of visitors in 2019 who waited up to six hours for a one-minute stay amid the twinkling lights in Yayoi Kusama’s infinity mirror room at the David Zwirner gallery in Chelsea, New York. Malnourished by their phones and computer screens, people yearn for real-life visceral experiences. And yet they remain stuck in the gravitational pull of virtual reality; the experiences they seek are ones they can record on their phone cameras and post on social media.

The renovated warehouse that Superblue occupies is across the street from a more traditional contemporary art institution, the Rubell Museum, which reopened at the end of 2019 in Allapattah, a commercial and working-class area west of its former location in the now-gentrified Wynwood district. Mera Rubell told Pace CEO Marc Glimcher about the availability of the building when they happened to be seated next to each other at a large dinner. The structure contains 50,000 square feet of exhibition space, with 30-foot ceilings. It will display installations for a year or a year and a half before they are trucked off to other Superblue sites in yet-to-be-announced cities. “That’s something we have to do to make the economics work,” co-founder Mollie Dent-Brocklehurst, based in London, told me on a Zoom call.

For the Miami exhibition, Superblue included “AKHU” by James Turrell, a Southern Californian who is an éminence grise of the experiential art world. The installation is what Turrell calls a Ganzfeld, a German word that denotes the loss of spatial perception that occurs in a featureless, uniform visual field, such as a fog whiteout. (As with Schadenfreude, Ganzfeld has no English counterpart.) In “AKHU” (an ancient Egyptian term that roughly translates as “soul”), an oblong of light is projected onto a smooth blank wall and tints the room. The color of the light gradually changes. If you climb the black-carpeted steps toward the threshold of the illuminated wall, your sense of where you are teeters vertiginously.