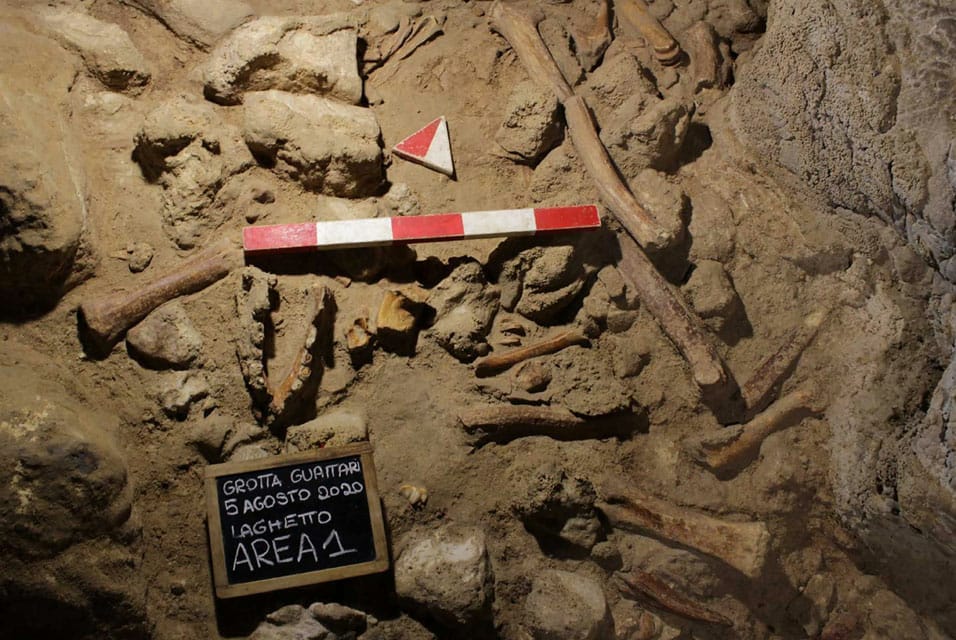 When a Neanderthal skull was discovered in a cave on the property of a beachfront hotel south of Rome in 1939, it prompted a theory, since debunked, that Neanderthals had engaged in ritual cannibalism, extracting the brains of their victims to eat.

Now a find at the same site, made public Saturday, appears to have confirmed the true culprit: Stone Age hyenas.

New excavations at the site in the coastal town of San Felice Circeo have uncovered fossil remains of nine more Neanderthals of varying sex and age along with the bones of long-extinct hyenas, elephants, rhinoceroses and even the Urus, or Aurochs, the now-extinct ancestor of domestic cattle.

Experts say the findings, at the Guattari Cave, will offer fresh insight on the culinary peculiarities of the Neanderthal diet and much more.

“The story of the cave didn’t finish in 1939 and still had a lot to give,” said Mauro Rubini, chief anthropologist of the local branch of the Culture Ministry. “Consider that the human skeleton is a formidable archive that tells us everything: their age, sex, height, what they ate, their genome, whether they had illnesses, how much they walked and even if they were able to have fun,” he added.

“We are working on solid scientific data so we can give a complete picture of the situation,” said Rubini, whose staff is in charge of analyzing the Neanderthal remains. One of the Neanderthals found in the cave lived about 100,000 to 90,000 years ago, and the other eight have been dated from around 65,000 to 50,000 years ago.

The cave’s discovery in 1939 created an international buzz when it yielded what remains one of the best preserved Neanderthal skulls ever found. The skull had a large hole in the temple, and its fame may have been fueled by the thesis put forth by Alberto Carlo Blanc, the paleontologist who first studied it, that the Neanderthals had engaged in ritual cannibalism.

In the latest excavations, led by a multidisciplinary team that has been working since October 2019, researchers found hundreds of animal bones with signs they had been gnawed on by hyenas — the Stone Age ancestors to today’s carnivores — who used the cave as a sort of pantry, said Mario Rolfo, who teaches prehistoric archaeology at the University of Rome at Tor Vergata.

It appears that the hyenas also had a taste for Neanderthals, and one skull found at the site had a hole similar to the one found in the 1939 cranium. That find definitively put to rest Blanc’s theory of cannibalism and cult rituals.

“Reality is more banal,” Rolfo said, adding that “hyenas like munching on bones” and probably opened a cavity in the skull to get to the brain.

“What it does mean is that there were many Neanderthals in the area,” Rolfo said.