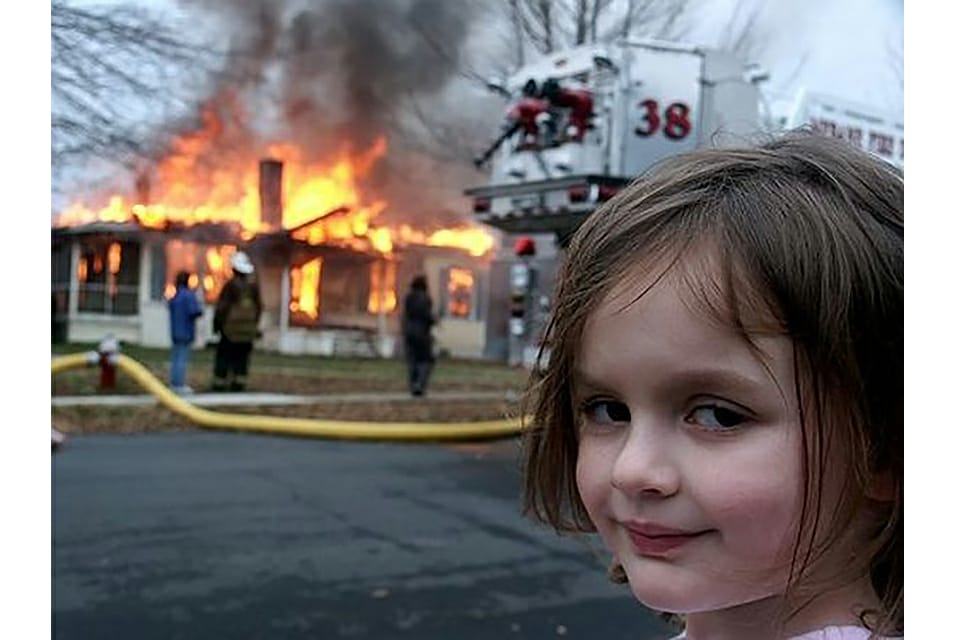 The name Zoë Roth might not ring any bells. But chances are you’ve seen her photo.

One Saturday morning in 2005, when Roth was 4 years old, her family went to look at a house on fire in their neighborhood in Mebane, North Carolina. Firefighters had intentionally set the blaze as a controlled fire, so it was a relaxed affair: Neighbors gathered and firefighters allowed children to take turns holding the hose.

Roth remembers watching the flames engulf the house when her father, an amateur photographer, asked her to smile. With her hair askew and a knowing look in her eyes, Roth flashed a devilish smirk as the fire roared behind her. “Disaster Girl” was born.

In the years since Dave Roth, Zoë’s father, entered it in a photo contest in 2007 and won, the image has been edited into various disasters from history, with Roth grinning impishly as a meteor wipes out the dinosaurs or the Titanic sinks in the distance. Now, after more than a decade of having her image endlessly repurposed as a vital part of meme canon, Roth has sold the original copy of her meme as a nonfungible token, or NFT, for nearly $500,000.

The meme sold for 180 Ether, a form of cryptocurrency, at an auction on April 17 to a user identified as @3FMusic. As with any currency, the value of Ether fluctuates, but as of Thursday, 180 Ether was valued at more than $495,000. The Roths retained the copyright and will receive 10% of future sales.

The market for ownership rights to digital art, ephemera and media known as NFTs, is exploding. All NFTs, including the “Disaster Girl” meme Roth just sold, are stamped with a unique bit of digital code that marks their authenticity, and stored on the blockchain, a distributed ledger system that underlies Bitcoin and other cryptocurrencies.

In the meme hall of fame, “Disaster Girl” ranks alongside “Ermahgerd,” a pigtailed teenage girl posing with “Goosebumps” books; “Bad Luck Brian,” immortalized in a grimacing yearbook photo with braces; and “Success Kid,” a toddler on a beach with a clenched fist and an expression of intense determination.

In an interview, Roth said selling the meme was a way for her to take control over a situation that she has felt powerless over since she was in elementary school.