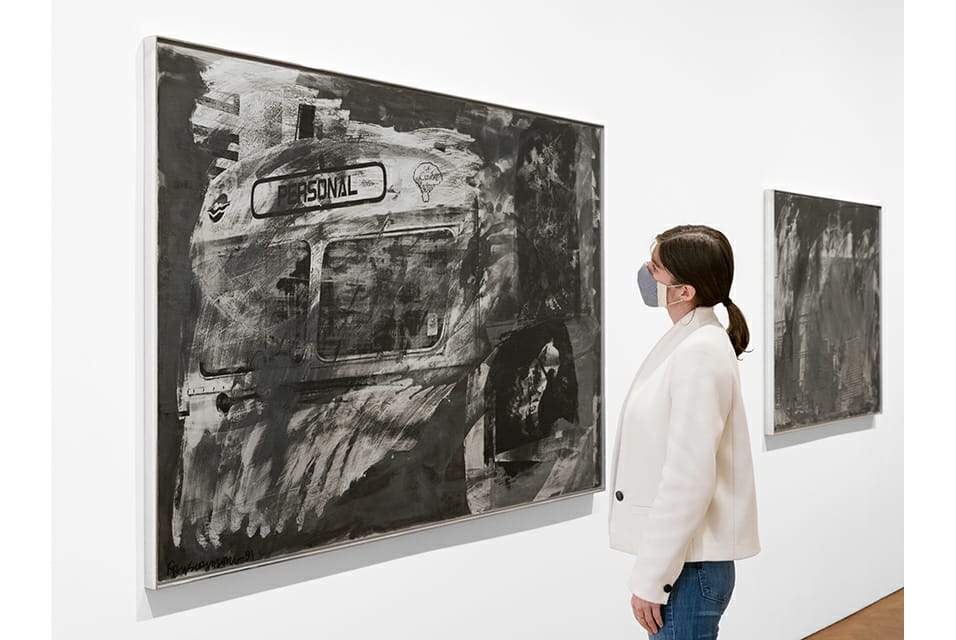 Robert Rauschenberg’s Night Shades and Phantoms are two series of metal paintings from 1991, composed of silk-screened photographic images and gestural strokes on aluminium supports. Made during his decade-long experimentations with metal, these paintings are characterised by their grayscale palette, which ranges from the Night Shades’ painterly chiaroscuro to the Phantoms’ mirrored surfaces and ethereal translucency.

Rauschenberg creates dream-like imagery which appears and disappears as a result of light, shadows and reflections across the artworks’ surfaces. The works respond to their surroundings, playing with the viewer’s perception and bringing the world into the paintings, recalling Rauschenberg’s famous maxim: ‘Painting relates to both art and life. Neither can be made. (I try to act in the gap between the two.)’. Organised in collaboration with the Robert Rauschenberg Foundation, the exhibition will also present a selection of photographs by the artist used as source images for the paintings on view.

One of the most influential artists of the twentieth century, Rauschenberg revolutionised the picture plane by bringing together painting, photography and sculpture in a highly inventive way. From the mid-1980s onwards, following his sojourn in Chile, he swapped canvas for sheets of first copper, then brass, bronze and in the case of the Night Shades and Phantoms, brushed and mirrored aluminium. Rauschenberg’s use of metal can be traced back to his earlier sculptural assemblages made with industrial waste and scrap metal, as in his Elemental Sculptures (1953/59), as well as in his Combines (1954–64) and his later Gluts (1986–89/1991–94). In the Night Shades and Phantoms, Rauschenberg used metal as a pictorial device that references the reality of an industrialised world while also serving as a reflective surface that captures images, impressions and memories.

For the Night Shades, Rauschenberg silkscreened images onto mirrored or brushed aluminium, applying a tarnish called Aluma Black with gestural strokes. At times the images are obscured by the tarnish, leaving expressive spills of black; at others, Rauschenberg mixed varnish with pigments which resist the tarnish and further enhance the works’ painterly qualities. For the Phantoms, Rauschenberg experimented with a different type of metal – mirrored, anodised aluminum – which repelled the tarnish, producing spectral images that appear or disappear according to one’s viewpoint. Therefore, the Phantoms developed from the Night Shades as an almost ghostly double.