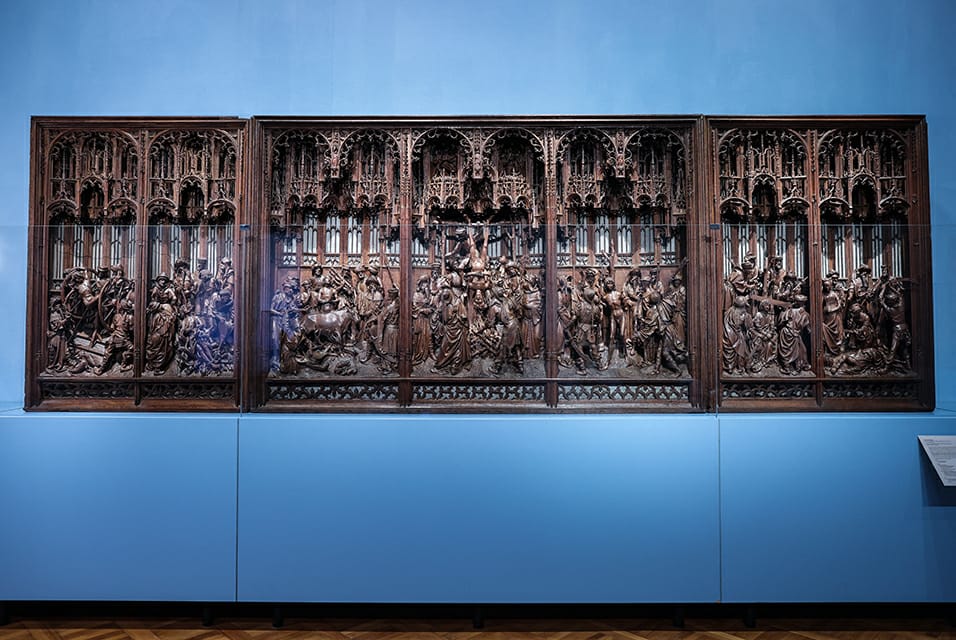 After three years of research and restoration, Jan II Borman’s iconic Saint George Altarpiece (1493) resides resplendently once again in the Art & History Museum in Brussels. The interdisciplinary research, in collaboration with the Royal Institute for Cultural Heritage (KIK-IRPA, Brussels), led to unexpected discoveries and provided answers to age-old mysteries. Thus, after almost two centuries, the magnificently carved sculpture groups were put back in their correct original positions within the meticulously restored monumental masterpiece. This project has been made possible thanks to the King Baudouin Foundation (Fonds René and Karin Jonckheere).

From Saturday 24 April, the Saint George retable can be admired as part of the Gothic-Renaissance-Baroque walking tour of the Art & History Museum. For three weeks, visitors will also be able to discover an original statuette of the late Middle Ages and a message from a 19th-century restorer that were carefully hidden in the work of art.

The Saint George retable is one of the most beautifully carved wooden altarpieces in Western European history. It is spectacular in size and scope: no less than 5 metres wide and 1.60 metres high, with more than 80 meticulously detailed figures. It is the masterpiece of Jan II Borman, the greatest master of the Brussels artist dynasty of the same name, described by some as ‘the best sculptor of his time’. He signed and dated the altarpiece in 1493.

The late Gothic scenes are timeless and in a class of their own. They draw the viewer in with their cinematographic compositions, lifelike characters brimming with expression and carvings of unparalleled virtuosity. The dynamic characters are depicted frozen in action, as if in a film still. In seven scenes, Borman illustrates the gruesome martyrdom of Saint George; hung above flames by the feet, broken on the wheel and beheaded, among other tortures. This because he refused to abandon his beliefs.

Inspired by the exhibition Borman and Sons. The Best Sculptors in the M ‒ Museum Leuven, Emile van Binnebeke, curator of European sculpture at the RMAH, set out to examine the masterpiece of the Borman dynasty in depth. He joined forces with Emmanuelle Mercier, a wood sculpture expert at KIK-IRPA, and her colleagues in the scientific laboratories at the KIK-IRPA. Emmanuelle Mercier was also in charge of the restoration treatment.

As the only signed work by Jan II Borman, for which a copy of the original written commission still exists, the Saint George Altarpiece is the key to understanding his creative genius. Moreover, the retable has always been shrouded in mystery. Was it originally painted with polychromy, like other Flemish altarpieces? In what context did it come about? And how can the bizarre order of the scenes be explained, which does not correspond to the legend and starts with the saint’s death?