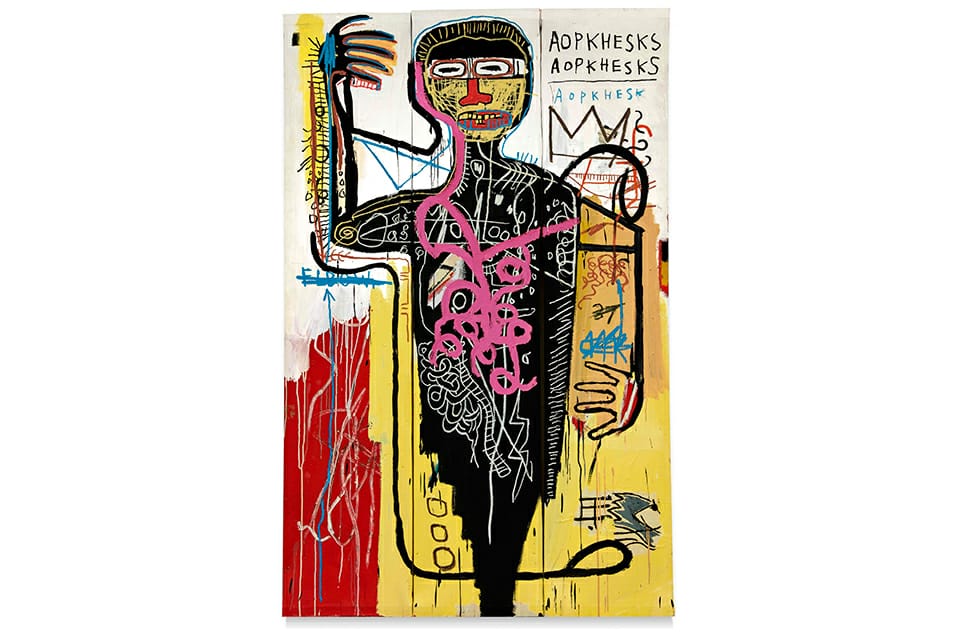 As the hammer fell on the last lot of Sotheby’s cross-category sale in London today, Sotheby’s auctioneer Oliver Barker unveiled live Jean-Michel Basquiat’s Versus Medici, which will take center stage in Sotheby’s Contemporary Art Evening Auction in New York on 12 May, where it will be offered with an estimate of $35/50 million. An extraordinary work executed in 1982 when Basquiat was only 22 years old, and soon after his transformative early trip to Italy in 1981, Versus Medici is among Basquiat’s most forceful visual challenges to the Western art establishment, in which the young artist boldly crowns himself successor to the artistic legacy as established by the masters of the Italian Renaissance.

Having remained in the same distinguished private collection since 1990, the work was previously in the collection of Stephane Janssen who was an early champion of Basquiat and acquired it from Larry Gagosian on a visit to Basquiat’s studio in 1982. It will appear at auction for the first time this spring. Testifying to its significance within the artist’s oeuvre, Versus Medici has been featured in multiple major exhibitions of the artist’s work, including Intuition at the Palazzo Fortuny during the 2017 Venice Biennale, and most recently, Jean-Michel Basquiat: Made in Japan, the artist’s first comprehensive survey exhibition in Japan.

Completed in the same year as Basquiat’s Untitled, which sold at Sotheby’s in 2018 for a record-breaking $110.5 million, Versus Medici is another prime early masterwork by the artist. Featuring the artist’s signature visual language, Versus Medici confronts a key cornerstone of Western art history, the Italian Renaissance, a movement associated with achievement and enlightenment, as defined by the works of Leonardo, Michelangelo, Raphael, Botticelli, and others. Painted at the inception of Basquiat’s career, the artist ambitiously wages a reckoning with the history of art and not only asserts his own place within this history, but also crowns himself a successor to these Renaissance masters. Basquiat was well-versed across art history, and a range of influences can be seen throughout the work – namely the anatomical complexity of early Leonardo drawings and the triptych format of the painting’s construction. Executed on three joined canvases, even the structure of Versus Medici draws upon Basquiat’s extraordinary familiarity with centuries of tradition by echoing the time-honored format of the tripartite altarpiece, and references the religious and political power that were associated with them.