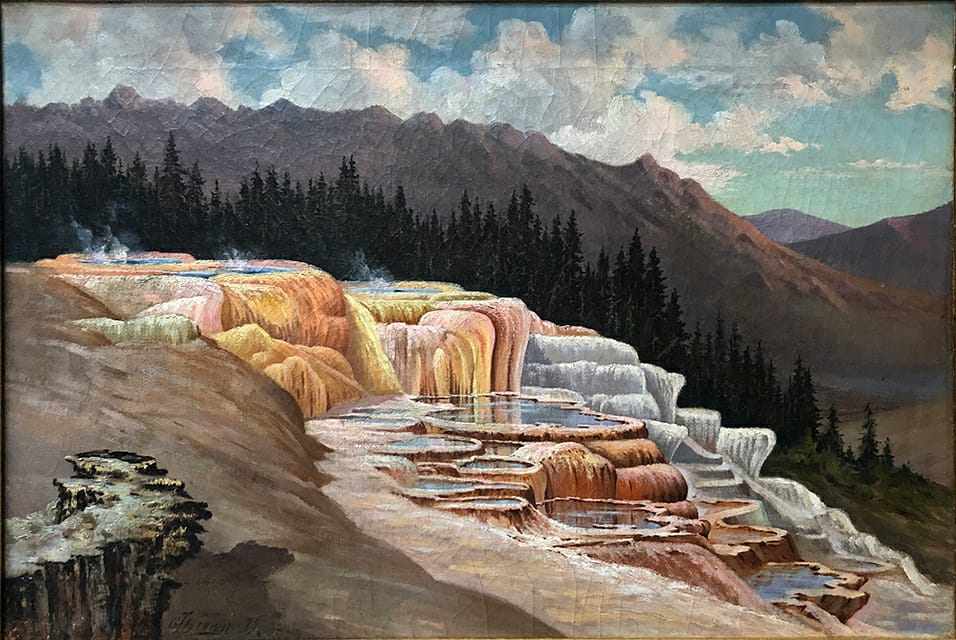 The Palmer Museum of Art at Penn State announced the purchase of the 1889 painting Hot Springs at Yellowstone by the artist Grafton Tyler Brown (1841–1918). Born in Harrisburg, Pennsylvania, to free Black parents, Brown went on to become known for his landscape paintings of Western subjects. “Nineteenth-century landscape paintings by African American artists are exceedingly rare,” said Erin M. Coe, director of the Palmer Museum of Art. “This work is the first by an African American artist of the era to enter the museum’s collection,” she added.

Grafton Tyler Brown spent his early childhood in Pennsylvania after his parents relocated from the slave-holding state of Maryland in 1837. As a teenager, he moved to California and worked for a noted lithographer in San Francisco. He took over the business in 1865 and renamed it G. T. Brown & Co. The business prospered producing city views, maps, and billheads throughout the 1860s and 1870s until Brown sold the company in 1878. Without any formal training, he turned to landscape painting in the 1880s and began making art and traveling the northwest through Victoria, British Columbia; Tacoma, Washington; Portland, Oregon; and Helena, Montana, finally settling in St. Paul, Minnesota, by 1893.

Brown is perhaps best known for his striking and detailed depictions of the natural wonders of Yellowstone National Park. Established in 1872, Yellowstone was a favorite subject of his, and he completed more than two dozen known paintings of its majestic, at times enigmatic, terrain between 1886 and 1891. Hot Springs at Yellowstone, which dates from a key period in Brown’s career, is a wonderfully vivid depiction of the stepped and striated rock formations there, charismatically capturing the almost otherworldly quality of the region’s distinctive hydrothermal pools.