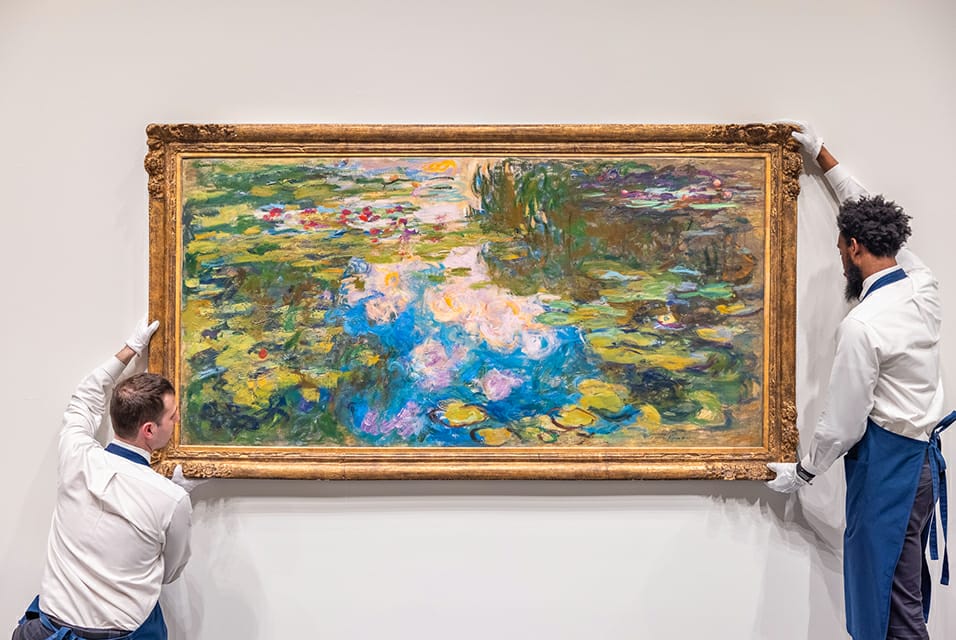 One of Claude Monet’s finest large-scale Water Lilies paintings ever to appear at auction will star in Sotheby’s Impressionist & Modern Art Evening Sale on 12 May in New York. Estimated in the region of $40 million, Le Bassin aux Nymphéas stands among the most iconic and celebrated Impressionist images.

Measuring nearly 40 by 79 inches, this enrapturing canvas from 1917-19 was conceived as part of the artist’s legendary series of monumental paintings depicting his water lily pond at Giverny, the Grandes Décorations, which he began in 1914 and examples of which can be found today in the Musée de l’Orangerie in Paris and The Museum of Modern Art in New York. The series took Monet’s paintings of the tranquil lily pond in a radical new direction and were twice the size of his earlier Water Lilies.

Ground-breaking in their nearly abstract treatment of the pond water’s surface and its reflections, these late works are recognized as an important bridge between Impressionism and Abstract Expressionism, as practised by Abstract Expressionist artists such as Jackson Pollock and Mark Rothko, several generations later.

With exceptional provenance, including the collection of famed Hollywood and Broadway producer, Ray Stark and his wife Fran, this masterwork will go on view in Taipei beginning 26 April before returning to the York Avenue galleries for exhibition by appointment beginning 1 May.

Julian Dawes, Co-Head of Sotheby’s Impressionist & Modern Art Department in New York, commented: “Claude Monet is among the most well-known and beloved artists of all time, and Le Bassin aux Nymphéas represents a quintessential example from his celebrated and famed Water Lilies series. Sotheby’s has an exceptional history as the house for Monet, including holding the artist’s record at auction from our sale of Meules in 2019 for $110 million, and we are extremely excited to bring such an illustrious picture to market for the first time in nearly two decades. As a remarkable example of Monet’s late period works from his cherished home at Giverny, this monumental painting beautifully encapsulates how Monet’s oeuvre evolved over time from his Impressionist breakthroughs to a more abstract focus with his preoccupation of his pond and water lilies. From this perspective, this work opens a whole new window onto how Monet would influence later generations of artists who expanded on his radical concepts into full abstraction, and set the stage for a new artistic movement that would take the world by storm. After remaining largely absent from the very top end of the market in 2020, we are thrilled to see Monet take center stage once again through this exceptional painting in our May Evening Sale.”