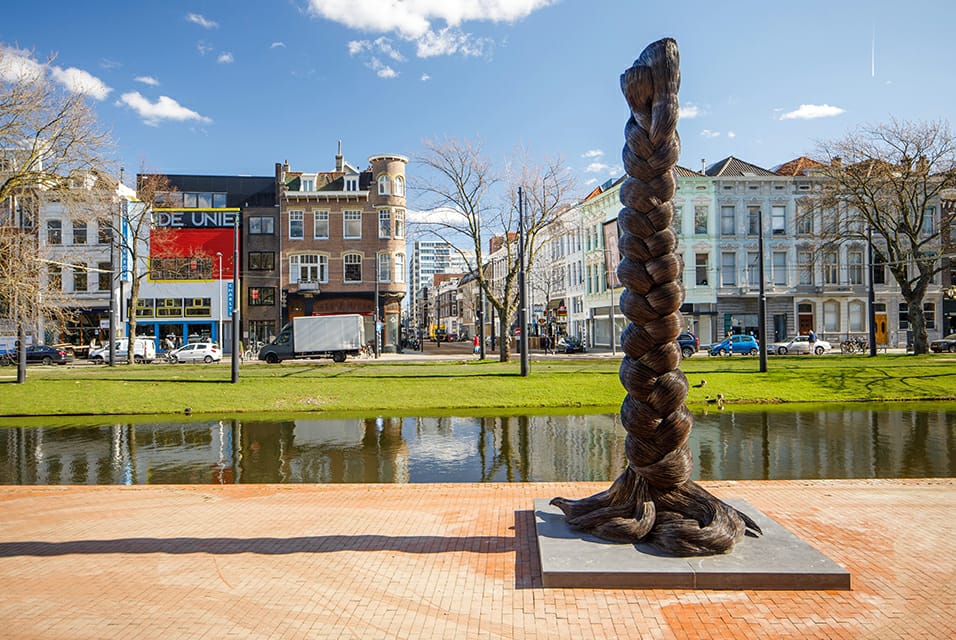 One of the most beloved pieces at FRIEZE Sculpture in London’s Regent Park last November has found a permanent location. Kalliopi Lemos’ giant steel sculpture The Plait has been acquired for the public sculpture collection Rotterdam. At a height of no less than six and a half meters, The Plait was unveiled on International Women’s Day.

The Plait is the title of the slender steel sculpture by the London-based, Greek-born artist Kalliopi Lemos (1951). The Plait, made in 2020, is an upright cut off plait of dark brown hair of monumental proportions. Kalliopi Lemos is best known for her large-scale public installations of everyday objects, sometimes of colossal size. The Plait raises questions about the role of femininity in modern society and rebels against patriarchal coercion.

The Plait is the first work by a female artist on the sculpture terrace. The sculpture terrace was founded in 2001 during Rotterdam European City of Culture. The Plait connects to the theme of the human figure of which the sculpture terrace displays examples. Ranging from modern classical bronzes by Auguste Rodin (l’Homme qui Marche, 1907) and Henri Laurens (La Grande Musicienne, 1938) to more abstract works by Fritz Wotruba (Reclining Figure, 1969) or Joel Shapiro (Untitled, 1999).

Today, the international ensemble on the sculpture terrace forms the centerpiece of a much larger collection that can be found throughout the city. After the devastating destructions in May 1940, when the historical city centre was destroyed by heavy Luftwaffe bombing, Rotterdam was rebuilt and contemporary public sculpture was regarded a vital component for the inhabitants of the new city. Works by renowned artists such as Ossip Zadkine, Alexander Calder, Henry Moore, Marino Marini and the Rotterdam-born Willem de Kooning a.o. were purchased or commissioned. This collection has grown over the years and will now be enriched once more. The Plait is the first addition to the terrace since 2001. Twenty years later, Monday, March 8, 2021, The Plait was unveiled.