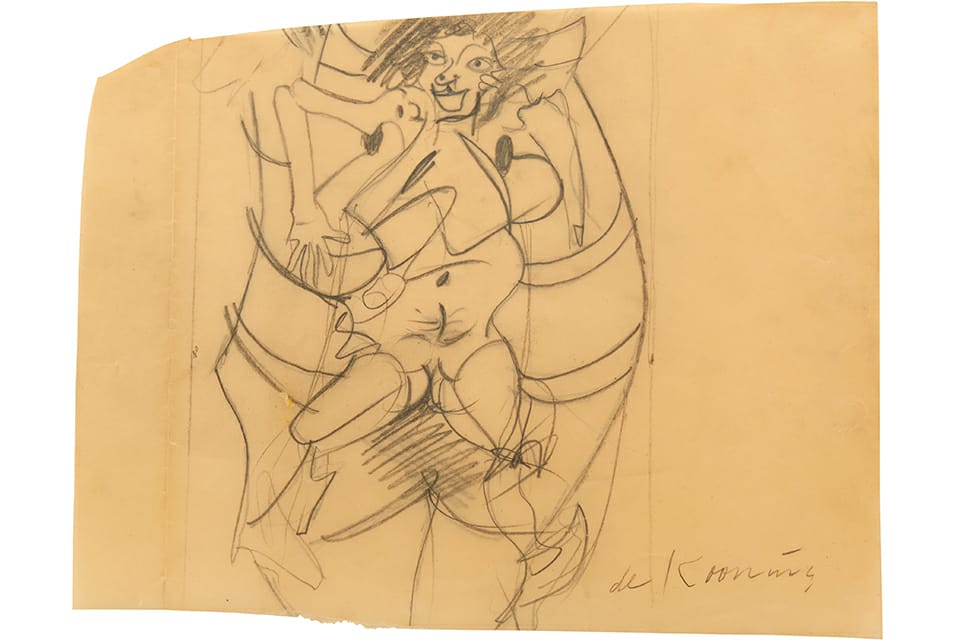 The tension between abstraction and figuration that defined de Kooning’s art is apparent in the exhibition’s earliest works. Included are several of his most celebrated drawings from the 1930s, including a 1937 study for his World’s Fair mural, his 1938 portrait of the art critic Harold Rosenberg, and the Ingresque Reclining Nude (Juliet Browner) (c. 1938), one of his first female nudes. The traditional skills he learned at the art academy in Rotterdam are evident in a sheet of precisely drawn portraits of Elaine de Kooning from the early 1940s.

By the following decade de Kooning had traded deliberateness for velocity. Included in the exhibition are three Woman drawings from c.1950 made up of swarms of graphite marks in constant motion, smeared or removed almost as quickly as they were laid down. One of them is inscribed to his close friend the dance critic Edwin Denby, another to the painter Grace Hartigan, who received it as a present from de Kooning on her thirty-sixth birthday.

Widely celebrated for his skilled draftsmanship, de Kooning nevertheless strived to avoid what he considered the pitfalls of virtuosity. In the mid-1960s he used experiments like drawing with his eyes closed to break old habits and discover new means of expression. Several drawings in the exhibition build on the lessons of those exercises. Drawn with charcoal, which facilitated even faster mark-making, they describe figures with an immediacy that the artist likened to snapshots.

The human form still provides the departure point for three turbulent drawings from the late 1970s, the latest in the exhibition. As de Kooning famously said, “Even abstract shapes must have a likeness.”

Beyond abstract expressionism: MoMA rethinks the art of the 1950s