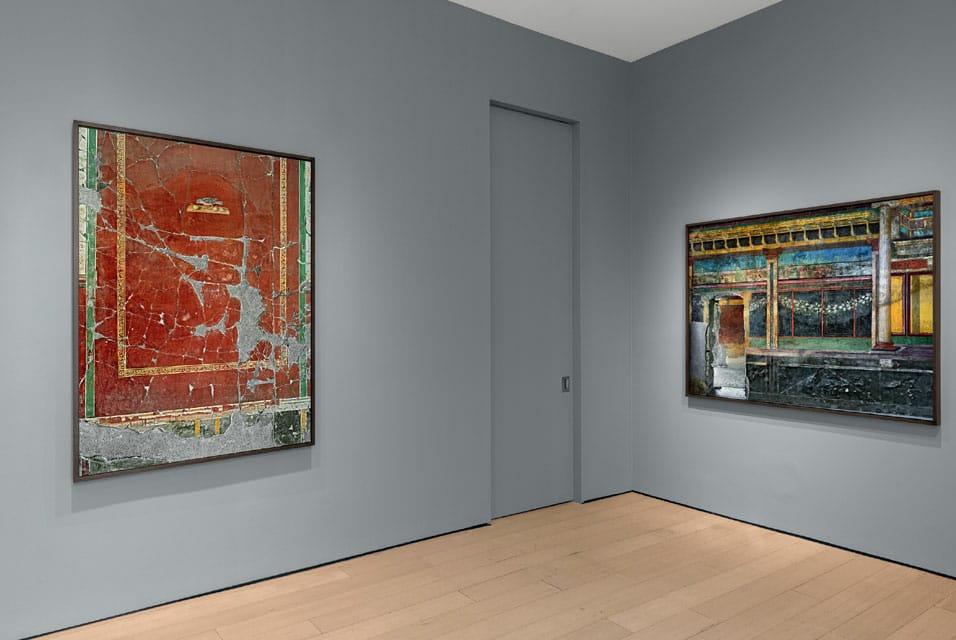 A new exhibition by Robert Polidori presents the artist’s large-scale color photographs of the ancient frescoes found among the ruins of Pompeii, Italy. Taken in 2017 and exhibited in North America for the first time, the works continue Polidori’s lifelong investigation into the spiritual and psychological resonance of architecture and interior spaces. The exhibition is on view at 297 Tenth Avenue in New York from April 22 to May 15, 2021.

Depicted in many of the works in the series is the Villa dei Misteri, a well-preserved dwelling on the outskirts of the city famous for its exquisite frescoes clustered in one room. These artworks, originating from 70-60 BC and restored between 2013-15, are among the best known of the relatively rare survivals of Ancient Roman painting and are understood to portray the rites of a young woman as she is inducted into the mystical cult of Bacchus. Polidori has since remarked upon the aesthetic continuity between the pagan rituals represented in the Pompeii murals, and the Christian imagery that defines the frescoes of Fra Angelico, a previous subject of the artist. While our cultures and rituals transform, the iconographic representational style remains remarkably consistent.

Utilizing a large-format camera and employing exposures of up to five minutes in natural light, Polidori is able to produce intricately detailed images at scale. As he explores rooms as metaphors for states of being, what at first might be mistaken for elaborate decorative motifs, painted to adorn a wealthy family’s accommodation, are revealed by Polidori to be imbued with a deeper force, acting as iterations of memory systems for whole cultures. Acting as a medium, Polidori reveals to us these interlacing layers of the past.