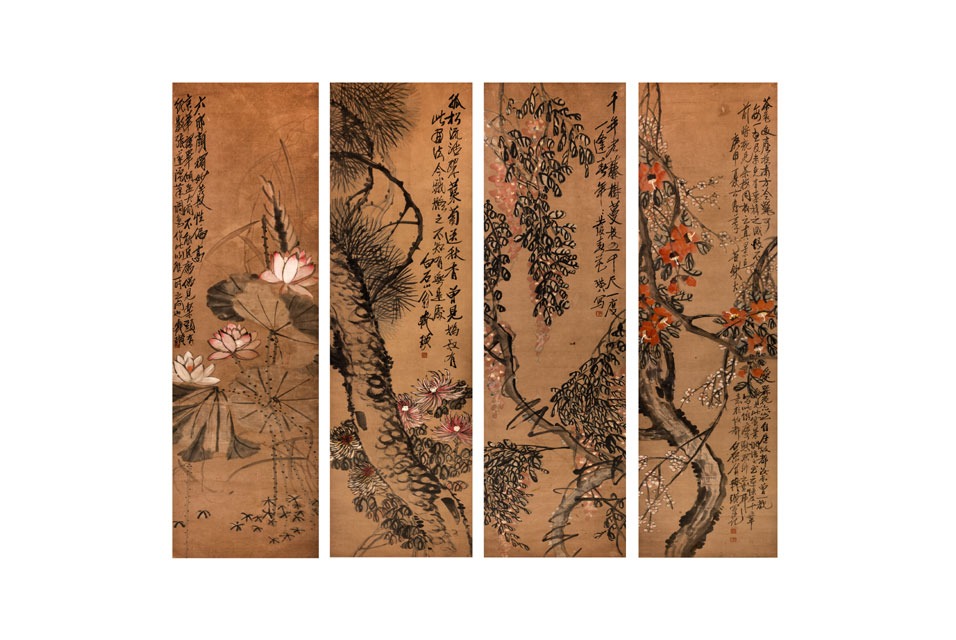 “We are thrilled by the range of unique consignments featured in our March sales,” said Annie Wu, Hindman’s Director and Senior Specialist of Asian Art. “We expect to see very strong engagement from online bidders given the current environment and anticipate that the sale will resonate with buyers, and what they are currently looking for in the Asian art market.”

Standout works in the Chinese and Southeast Asian Works of Art auction include a set of four scrolls by one of the most famous Chinese artists Qi Baishi titled Flowers of the Four Seasons: Wisteria, Lotus, Chrysanthemum and Prunus (lot 29; estimate: $80,000-120,000), and a large and finely painted painting Peonies and Quails with signature of Zhao Chang, thought to potentially be from the Northern Song Dynasty (lot 17; estimate: $30,000-50,000). A well carved 18th century bamboo figure of a yawning luohan attributed to Feng Xilu and with an attractive estimate (lot 67; $6,000-8,000) is another highlight. A set of four famille rose porcelain ‘landscape’ plaques, each finely painted with blue and green enamel and depicting four scenes of a riverbank is also a notable work (lot 149; estimate: $25,000-35,000).

Other exceptional lots include a sancai glazed pottery figure of a standing horse from the Tang Dynasty (lot 105; estimate: $20,000-25,000) and a gilt bronze figure of Shakyamuni Buddha, possibly from the Ming Dynasty (lot 305; estimate: $20,000-25,000). A pair of Ming Dynasty cinnabar lacquer brushes and covers is another remarkable scholar’s object (lot 78; estimate: $20,000-25,000). A mother-of-pearl inlaid black lacquer twelve-panel screen is another outstanding work (lot 18; estimate: $15,000 – 25,000). Each panel is inlaid with mother-of-pearl depicting a landscape with scholars and officials accompanied by attendants with guests gathering at the riverbank. The top of each panel features mountain peaks and distant pavilions enshrouded in clouds and mist, and the reverse is decorated with a birthday congratulation article in gilt lacquer, dated year Bingyin of Emperor Qianlong (1746).

Bidding for the March 25 and 26 auctions begins at 10am CT. Bidders will be able to participate via absentee bid, by phone, or live online through the Digital Bid Room, Hindman’s recently launched online and mobile bidding platform. The March 27 sale is online-only, and bidding will be available through LiveAuctioneers.com.

Long-lost mosaic from a 'floating palace' of Caligula returns home

Taking over Victory Gardens to make a ‘theater for all’