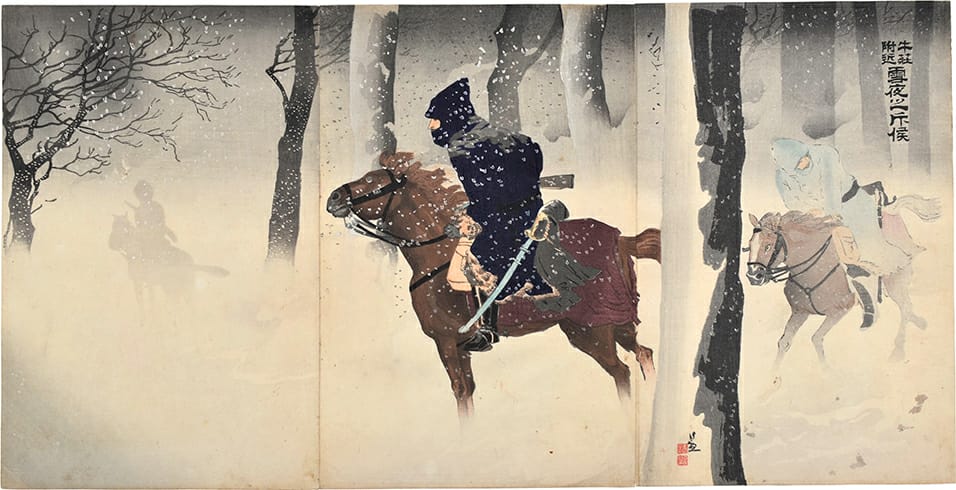 Scholten Japanese Art is presenting, On The Vanguard: Meiji Period Woodblock Prints, a two-part exhibition, with thirty prints in each section, exploring the creative expression seen in Meiji-era prints and the acceptance of new cultural ideas in the Japanese populace at large during this dynamic period in the late 19th and early 20th century. Delineated by the reign of Emperor Meiji (1852-1912; reign 1868-1912), it was an era of rapid modernization as Japan remade itself as a nation, both figuratively, as it transformed from a feudal society based on samurai culture. Drawing on Western models, the old social classes were abolished, the army was reformed, a navy was created, and industries adopted emerging modern technologies. In the artistic community, the traditional master-student system began to be undermined by newly established Western-style art schools, and the introduction of foreign techniques for print production and photography was nearly ruinous to the once vibrant woodblock print industry. The prints in this show look at how artists recorded and responded to the introduction of foreign elements. Many print designs explored and celebrated Western influence, particularly with the first blush of the new era. But artists also responded to the market’s tendency towards nostalgia, resisting the march toward modernity. Ultimately, the artists who prevailed were those that were on the vanguard—leading the way—by embracing, a changing world while adapting and balancing society’s intermittent longing for ‘Old Japan’.

Part One—Cultures Collide, begins with a selection of prints depicting the sudden presence of foreigners in everyday life, and subsequent merging of Western and Japanese aesthetics and fashions. A triptych by Utagawa Sadahide (1807-1873) from 1861, Home of a Foreign [American] Merchant in Yokohama is a precursor to the explosion of change to come with a scene of a lively gathering of foreigners on the second floor of a mercantile establishment in Yokohama, one of the ports where Westerners were initially confined as Japan reluctantly opened to Western trade in the 1850s. One of the artist’s most famous compositions is set in Yokohama offering a view across a verandah towards a dining area partially open to the port with clipper ships in Edo Bay; the red and white stripes of a flag in the upper left corner suggests the occupants are American. In the foreground two foreign gentlemen pause near a western woman playing a stringed instrument similar to a violin but holding it in the manner of a guitar and plucking at its strings with a plectrum as though it were a shamisen. She is accompanied by geisha playing her shamisen while facing away from us. Two courtesans mingle nearby, one wearing a kimono with a red and white star pattern and a blue and white striped over-robe in an inversion of the stars and stripes of the American flag