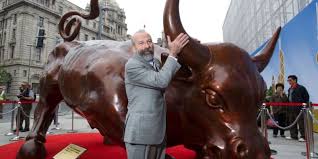 A Sicilian-born artist, he installed the artwork in Lower Manhattan without permission. The outpouring of public support persuaded the city to keep it.

Arturo Di Modica, a Sicilian-born sculptor best known for “Charging Bull,” 3.5 tons of bronze belligerence that he illegally deposited in Lower Manhattan one night in 1989, died on Friday at his home in Vittoria, Italy. He was 80.
His death was confirmed by his dealer, Jacob Harmer, who did not specify a cause but said that Mr. Di Modica had been ill for several years.
“Charging Bull,” which Mr. Di Modica had made with his own hands and his own money, quickly became one of the most famous works of art in the country and a photogenic draw for millions of tourists — many of them presumably unaware of its illicit origins.
Mr. Di Modica grew up poor in Sicily, and he bore an immigrant’s love for his adopted home. With the country — or at least Wall Street — still reeling from “Black Monday,” the day in 1987 when the market dropped 20 percent in a single session, he wanted to give the country a get-well present, one that, he said, symbolized “the future.”

What he did not have was permission to place his enormous sculpture outside the New York Stock Exchange, his intended location.

Deciding that good intentions trumped petty matters like city permits, Mr. Di Modica spent weeks scouting Wall Street after midnight, taking note of how often police officers passed by.
Then, around 1 a.m. on Dec. 15, he loaded his sculpture onto a flatbed truck and drove to Broad Street, next to the stock exchange, where about 40 of his friends were waiting.

But there was a problem: Since the last time he had been there, the stock exchange had erected an enormous Christmas tree, right on the spot where he wanted to deposit “Charging Bull.”

“Drop the bull under the tree,” he shouted. “It’s my gift.”
Stock exchange officials, however, did not appreciate his beneficence, and that afternoon they had the sculpture trucked to a police warehouse in Queens.
Mr. Di Modica was distraught, but that evening he received an offer to move the sculpture to nearby Bowling Green, a park at the foot of Broadway. He visited the warehouse and paid a $500 fine, and on Dec. 20 the sculpture took up its new residence on a traffic island, where it has remained for 33 years, perpetually poised to charge through the Financial District.

After “Goodbye” Rashmika’s Next Bollywood Film Opposite Kartik Aryan In ‘Aashiqui 3’?