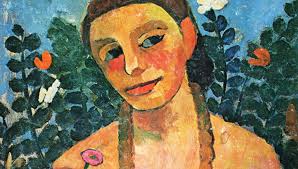 Modersohn-Becker died in November 1907, 18 days after giving birth to her daughter, Mathilde.

She was 31, her artistic achievement at once stunning and unfulfilled.

Still, having realized early that she was an artist and having worked with notable discipline since she was a teenager, she left an exceptionally large body of work, including more than 700 paintings.

It had been regularly jolted forward by sojourns in Paris, where she absorbed all she could of old and new art.

She made strikingly simple drawings of ancient Egyptian sculpture and Fayum mummy portraits at the Louvre that reflected her love of distillation, while discovering modern painting in works by van Gogh, Gauguin, Henri Rousseau, Cézanne and finally Picasso in galleries and annual salons.

Born in 1876 to a comfortably middle-class family in Dresden, Modersohn-Becker seems to have always been determined to be somebody.

She had an innate feeling for the human body as an expressive form, quickly connected to oil paint and was unafraid of ugliness.

In fact, achieving it was one of her goals, reflected in her earthy palette and the way she attacked her surfaces with the back end of a brush.

Modersohn-Becker painted from a female, implicitly feminist point of view, granting women and also children a memorable emotional complexity through the physicality of her paint and the solidity of her forms.

She often painted them out in the open, alone with the birch trees of Worpswede, at liberty, without sentimentality. Her scratched, patchy paint surfaces make her subjects engaging as forms, evoking a gritty realism within a kind of timelessness.